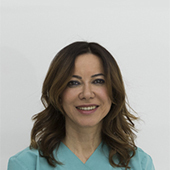 Melike Kulahci, MD, was born in raised in Konya, Turkey. After graduating from the German Highschool, IEL, in Istanbul, Turkey, she became a student at Cerrahpaşa Medical School, the leading University in the country for medical studies.

Upon getting her Bachelors degree, she went on to do her mandatory residency at the International Airport, Istanbul. Finally, she received her degree as a specialist physician after completing the Anesthesiology and Reanimation Specialty at Cerrahpaşa Medical School. Immediately thereafter, she moved to Germany with a fellowship to study at the prestigious Erlangen University in 1990 as a surgical assistant to gain first-hand experience in hair surgery which was a nascent surgical area in that point in time.
Upon returning to her home country, in 1994, she founded Transmed Hair and Cosmetic Surgery Clinic to offer happiness in the mirror to her medical guests.

Over the last 25 years in the hair restoration field, Melike Kulahci, MD, operated more than 10 thousand successful cases, gave trainings to more than 20 surgeons and 100 nurses in the field, organized prestigious meetings on ground breaking hair loss topics, attended more than 100 conferences worldwide both as a speaker and administrator, wrote research papers that won world-wide acclaim and served as the first and only Turkish physician in the board of ISHRS, the International Society for Hair Restoration Surgery.

Please see the abovementioned seminars, congresses and papers listed below.