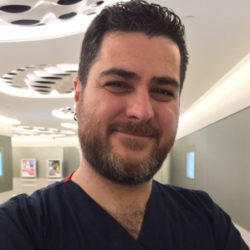 Having performed more than 5,000 hair transplants over 13 years, Dr. M. Resat Arpaci, the Founder and Head of Prime Hair Transplant Clinic of Turkey, is one of the best qualified, experienced and skilled hands that patients can trust with hair restoration surgery.

Dr. Arpaci graduated from Izmir Dokuz Eylul University Medical Faculty in 2000 and has started practicing medicine in Sakarya, Turkey as an Emergency Room physician. Early in his career, he developed an interest in aesthetic medicine and concentrated his efforts in this field, gradually focusing on hair transplantation only. He started receiving hair restoration training from leading experts in several prestigious clinics in Turkey and abroad. Upon completion of his formal training, he received his Micrograft Hair Transplantation Certificate from the International Society of Hair Restoration Surgery (ISHRS) in Berlin, allowing him to practice hair transplantation with the FUT technique as early as in 2002. During the same year, he also secured his Biofibre Synthetic Hair Transplantation Certificate through the Milano Hair Transplantation Institute and established his hair restoration practice in the Kusadasi and Izmir area of Western Turkey. Between 2004 and 2005 he completed his formal training and earned his Medical Aesthetics License offered by the Flavius Aesthetics Training Center and issued by the Turkish Ministry of Health. In 2006, Dr. Arpaci has had the opportunity to train with Dr. Bessam Farjo, one of the world's leading hair restoration surgeons, when he started to use and perfect the FUE technique and stopped using FUT. In 2007, he invented and patented a unique FUE micromotor technique allowing hair restoration surgeons to work with the maximum number of hair grafts required for hair transplantation.

Dr. Arpaci was also the founder, head and chief instructor at the Beauty and Aesthetics School, sponsored by the Turkish Ministry of Education, where he trained several doctors, nurses and aestheticians on hair transplantation and medical aesthetics between 2008 and 2011 in Izmir.