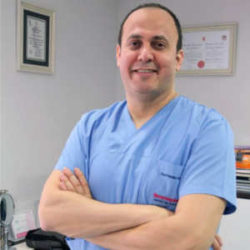 He was born in Denizli- Tavas in1967. Dr. İbrahim Aşkar got a successful degree in the university entrance exams in Turkey and he graduated from the Medical Faculty (English) of Hacettep University in 1992. He received  rotation training in the Department of General Surgery of the Medical Faculty of Dicle University in 1993. He completed his specialization education in the Department of Plastic and Reconstructive Surgery of the Medical Faculty of Ankara University between the years of  1993-1998. After completing 2 months of rotation in the Department of Plastic and Reconstructive Surgery and the Burning Unit of Gühane Military Medical School, he founded the Department of Plastic and Reconstructive Surgery of Medical Faculty of Dicle University and managed as the chief bet ween the years of 1998 – 2004. He has done many microsurgical operations and in 2004 he became an Associate Professor. Dr. Aşkar has received rewards and greetings for the surgeries and papers that he did during his career. He has been working as a consultant editor in the magazine of ‘’Microsurgery’’ published in America since 2004. Assoc. Prof. İbrahim Aşkar has been doing his profession in Istanbul since 2007. After a work for a certain period of time in Sema Hospital, he started working at his own place. He speaks English fluently and he speaks Deutsch, and he is married with one child. He is a member of the Association of Turkish Plastic Reconstructive and Esthetical Surgery and he has some hobbies such as fine arts, hand works, science and technology. Dr. Aşkar has written many articles and he is still working as a free doctor.