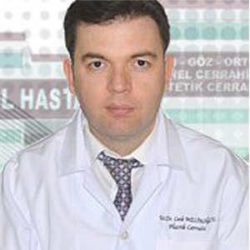 He was born in Görele in 1978. He graduated from 9 September University Faculty of Medicine. He received his residency training between the years of 2003-2010 at The Aesthetic and Plastic Surgery Clinic of Izmir Atatürk Training and Research Hospital. He worked as a visiting lecturer at Paris American Hospital. When abroad, he focused on free vascularized lymph node transfer relating microsurgery for lymphedema and attended many trainings and conferences about this subject. He published more than 30 articles in the literature not only in national but also international journals. He has been working at the Aesthetic and Plastic Surgery and Cosmotology Clinic of Ekol E.N.T. Hospital since 2016. He has a good command of English. He is married with one child. His specialities are as follows: aesthetic rhinoplasty, lymphedema surgery, endoscopial face lift, aesthetic body contouring surgery (tummy tuck, liposuction, aesthetic breast surgery), hair transplantation with FUE method, migraine surgery, surgical correction of gynecomastia, aesthetic genital surgery (especially penis enlargement) and cleft lip correction. In 2010 he became entitled to get “Certificate of Competency” by winnig the exam that was conducted by The Turkish Association of Plastic Surgery. In 2015 he took part in and won first place the medical competition that was conducted by Gülhane Military Medical Academy with his work entitled “Saddle-nose deformity repair with microplate-adapted costal cartilage”. At the moment he continues his academic and scientific work.